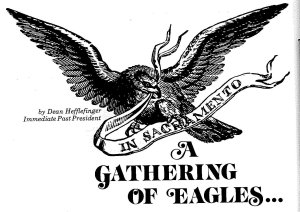 Pssst … Buddy, ya wanna buy an eagle? Rent one? How about a long term loan?

This is what the US Department of Interior offered the Sacramento City Zoo; a permanent loan of several pairs of Golden Eagles, provided an appropriate display area be created. And that’s when the Active 20-30 Club of Sacramento go involved.

A year ago (May ’73) Bill Meeker, a Director of the city zoo, was invited to speak before the Sacramento club on “What’s New At The Zoo?” After hearing about the development of the zoo into one of the most formidable for a community the size of Sacramento, and about Meeker’s plans for future zoo development, he was invited to make a presentation before the club’s Projects and Charities Committee.

Meeker advised the P/C Committee that in order to keep pace with other similar zoos, and in order to maintain public interest and attendance, a new exhibit should be developed every one or two years. Meeker added that there were no funds available for expansion. He therefore envisioned his best source for zoo expansion would be through the Sacramento area’s service clubs. He felt that if one major club, such as Active 20-30, would provide the first new exhibit, this would be the initiative for other service clubs to build additional new exhibits.

Meeker introduced his plans to expand the zoo with a new ornithology area to include many new aviary exhibits. The first being the new eagle aerie for our national bird. He showed the P/C Committee an illustration of a new eagle display shaped like a giant canary cage and said the cost would be approximately $1,500.00 for material and construction. The committee suggested the plan ought to be revised to a larger more natural exhibit with high rock formations, trees, etc. Meeker thought this was a great idea but too expensive since it would boost the cost to around $20,000.00.

Nevertheless, the Sacramento club believed they could build such a cage, using the resources available through its own members, and voted to go ahead with the project. 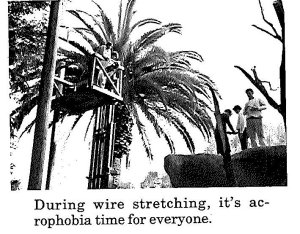 After the zoo provided the basic design, several engineers from the club determined what the structural requirements would be and their approximate costs. They estimated if the club could obtain the majority of the materials by donations from the community, the cost could be kept within $2,000.00 … including food and beer. After this, several club members in the construction industry determined the time and manpower requirements. They estimated ten to fifteen members working on the project for five or six weekends would complete the entire job.

An “Eagle Cage Committee” was formed with two co-chairmen: Steve Whichard, who is a partner in Whichard Construction, to provide the expertise and round up materials; and Ned Strong, from the mortgage business, to provide manpower.

The exhibit was planned to include a 25-foot high heavy-gauge screened area which could best be framed with telephone poles. The then-president of the Sacramento club (ahem) just happened to be employed by Pacific Telephone and was able to obtain enough poles for the exhibit, which the telephone company also placed. Through members in the construction industry, cement for the foundation, lumber, nails, metal 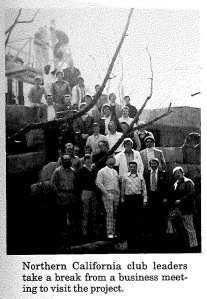 doors for the building, and many other materials were provided. Another major construction item was the framing and gunnite material to create the rock-mountain structure. Steve Whichard was able to have all of the material, as well as its construction, donated by the Northern California Lethe and Plaster Contractors Association. This, obviously saved the club several thousand dollars. All other labor, in addition to tools such as forklifts, power equipment, hammers and pliers, was provided by club members.

The cage took seven working weekends to complete, starting last October and ending in April. Dedication will be May 23, 1974.

Sacramento City Zoo now has a new eagle aerie at no cost to the city, valued at $20,000.00, because of the initiative, imagination and effective use of resources of the Active 20-30 Club of Sacramento.