Surprised Discovery: Not only was there a Sacramento Active Club, but they had a Convention in 1947, one year after the Sacramento 20-30 Club hosted their Convention.

I knew there were separate Active and 20-30 Clubs in California before the organizations merged, but I had no clue there were both in my hometown. 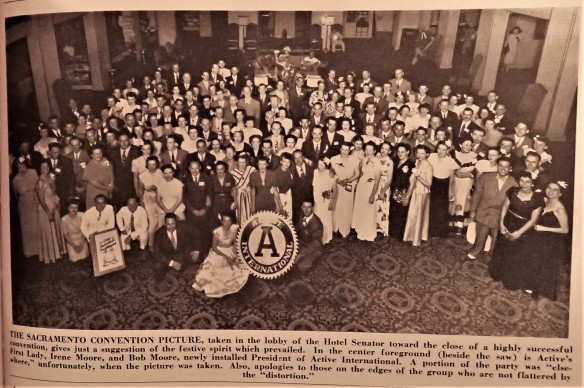 Caption: “The Sacramento Convention Picture, taken in the lobby of the Hotel Senator toward the close of a highly successful convention, gives just a suggestion of the festive spirit which prevailed. In the center foreground (beside the saw) is Active’s First Lady, Irene Moore, and Bob Moore, newly installed President of Active International. A portion of the party was “elsewhere”, unfortunately, when the picture was taken. Also, apologies to those on the edges of the group who are not flattered by the “distortion””.